Fortunately, the weekend's weather was uncharacteristically magnificent, even as "mild" winters go.
I raced both days. Saturday was my first CRCA club race. The Lion and I headed into Manhattan for the 6:30 AM race.
Not knowing what to expect, we planned our departure to leave ourselves about 45 minutes after we were to arrive at 79th St. and 5th Ave. where we usually park.

The strange thing was there were no parking spaces left within sight on 5th. Hmpf... we parked on 77th, which was empty... hmpf, again... as we rolled towards 5th, we noticed a business-card-sized sign that read something to the effect 'no parking here today, repaving road, all cars will be towed & demolished... your day will be ruined if you dare park here'. Just then, a spot opened on 5th and I told the Lion to gimme his bike & to go move the car. He moved it as I positioned myself and our two bikes in the open spot.

Day-ender averted, we noodled into the park to see a line that rivaled one you might find at a middle school if the Jonas brothers showed up. While I do not know the exact number of racers in all three A, B & C races, there were between 150 and 500 A riders in my field. The Lion and I stuck near the front, but this had the making of a field sprint from the gun... no prize today.

On Sunday, I drove in with Matt, as the Lion was looking for a bit more mileage after the first Spring series race with his Axis teammates. Axis is the strongest masters team in New York. I've struck up a nice relationship between the shop and this first rate group of gentlemen.

As I joked with the Lion all Winter, I'd be marking Axis/Global (their team won the SS outright last season)/Deno's all Spring.
I stuck near or off the front in the early laps, covering and trying to drive any separation that included these teams. Roughly 2/3 through the penultimate lap, the Lion rolled off with another rider. As I sat glued to last years' winners' ass, Tim Spence from Axis went across solo...brilliantly, by the way. As I rolled up next to Jon from Axis I remarked that I would not drive the chase...that that was the job of the two other powerhouse teams. So, every single time the Global and/or Denos guys attacked, I was there.

The rate at which Tim, the Lion and their temporary teammate gained ground was crushing to them... game over. With 1/3 of a lap to go, the Axis guys worked their guest over... Tim took a well-deserved win and the Lion was 3rd. I contested the field sprint, but the Major Taylor boys (also a huge team, but full of sprinters) were sketchy and the most dangerous dude pulled out of his pedal 100 meters from the line, right in front of me...over-geared after slowing, I limped in 8th or 9th in the field sprint for 11th or 12th...

I feel I have really good fitness right now and am biting my lip to not go out and add junk miles to my carefully orchestrated plan because it's beautiful out. A few more races and I should be rocking..

To add insult to injury, I mistakenly put my SRM in my vest pocket to collect race data, ass u ming it would pick up the signal there as a power tap CPU does... new note to self: That ain't the case.

Well, I've wasted enough time... there's no time to get on my bike before going into the shop...
Posted by Mike at 8:44 AM No comments:

My CTL that is. Planning or seeding my PMC as I do with myself and the athletes that I look after, I see that by March 14th, I will have "given back" in terms of CTL roughly 1.5 TSS/day over the last 6 weeks corresponding to my VO2max focus. This will have it settle in right around 80 for the Spring Series, the first CRCA club races and I plan to keep it right there through Battenkill.

I've always thought that the quote by wattage group frequent poster Tom Annalt, "FTP is how hard you can go...CTL is how long you can go hard" is pretty true. This is about the lowest CTL I've carried since the introduction of the PMC back in '05... 100 TSS/day has always been my number.

Why the difference this year? Well, simply put, I want to be able to go harder! So far, so good...FTP is staying put, as is evident by my threshold maintenance workouts every 6 days. As I'd hoped, I've picked up ~5% in terms of power at VO2max in the last 3 weeks. I'm looking for another 5%. Doing this type of intense training requires a great deal more recovery time than threshold training. As a matter of fact, I listened to a webinar by Andy Coggan last night and he said training at VO2max releases more catecholemines than getting into a car accident wherein you break several bones! It is the inclusion of more recovery time that has brought my overall volume down.

Out of curiosity, I rode the Lion's Flanders loop with him Saturday. Very hard, hilly 44 mile loop in <2 hrs. on open roads in 30F temperatures... just to see 'how long I could go hard'. I found holding .9 IF almost easy. I floated up hills over VO2max power beside the Lion wondering if this power meter was broken or he was tired. I've certainly re-zeroed it before when I was sure it was reading low, but I found myself wondering if it was too high. Nope. Spot on.
Posted by Mike at 8:46 AM 1 comment:

Butterflies today... it must be Monday.

Well, not exactly 'butterflies' , but a very distinct nervous feeling upon waking this morning.
Today, Monday, is scheduled to be VO2 max intervals day #2 for the 2010 racing campaign... hence, the weight of the impending suffering sits atop my shoulders.

As I mentioned in my last post, I dedicated a very focused 12 week period to FTP development and am at the point where I am bumping up against genetic limits imposed by my VO2 max. As we age, past about 30 yrs., and I am a ways past this age, we lose a small amount in the O2 consumption department each year and if left unaddressed, our FTP gets closer and closer to this ceiling. In short, it's time to raise the roof.

Session #1 went well last Thursday, with the average of my 6 x 5' @ L5 coming in just a few watts below my previous high last season. My hope is that I can pick up ~20 watts before this 6 week period is complete... this is about a 6% increase for the set. Six week's is about the maximum time I've found practically that VO2 max can be lifted. After that, it's about staying fresh, sharpening and racing.

The truth is that I haven't done a really structured program of L5 stuff for many years.
The problem with it is that I find it very painful (in a 'this is really uncomfortable, how can five minutes take so long?' kinda way).
Clearly, anyone that has raced a bike knows, it isn't about the average power or the maximum 5 sec effort that hurts the most... it's a period of about 10 minutes when the 'shit goes down' and the race separates the break from the peloton.
The break is determined by who has the fatigue resistance (FTP), engine capacity (VO2 max), craftiness & tenacity to grovel in the gutter until the break is clear. As my old Cat 1 friend once said, "If you aren't very close to getting dropped for the first 10', then the group isn't going fast enough to stay away".

I will complete 12 total VO2 max workouts in a variety of forms, banging one out every 3-4 days. I haven't the luxury of a high enough VO2 max simply from riding my bike to neglect power at VO2 max, so it's time to 'publish post' and to head down to the pain cave. Later.
Posted by Mike at 6:28 AM No comments:

Recently, I told one of my buddies that I was carrying a CTL of 90, with most of my riding done indoors over the last 3 months and was greeted with a " No way! How can that be?" Well, I went back to look & I wasn't completely honest (actually, I didn't realize what I'd actually done)... but I wasn't far off.

There it is. I haven't had the chance to compare this to last year, but I was doing far less structured, longer training sessions outdoors in what is frequently referred to as the Sweet Spot. I have done no structured work above L4 and have gotten the very small dose by 'accident' outdoors and by slightly overshooting the top of L4 during L4 workouts.

Now for the bad news (for me, not them)... at least three of the young guns I'm working with have got me by half a watt per kilo!
Ahhh... to have known then what I know now.
Posted by Mike at 3:38 PM No comments: 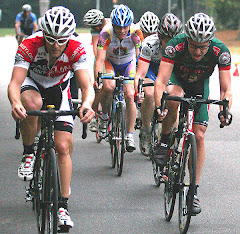